The Reflecting Pool – Collected Work is a collection of five independent works composed to function as a whole.  Each uses varying styles and techniques to advance the theme of the collection:  the progressive stages of the personal journey from birth to death, described through images of transition –  from day to night, object to reflection, motion to stillness, time to timelessness.

All movement and change in an otherwise still scene is limited to the reflections and undulations on the surface of a pond in the woods. Time becomes extended and punctuated by a series of events seen only as reflections in the water. The work concerns the emergence of the individual into the natural world, a kind of baptism.

An expression of the feminine principle.  Day and night converge within the silhouette of a woman; a rushing waterfall sweeps over underlying rocks with disorienting violent motion; and the serene interplay of light and shadow unfolds within a glass of water at dawn in the desert.

A document of the first images of life. A series of portraits of newborn babies from five minutes to one day old recorded in a hospital nursery that reveals both the nature of institutional birth and the pure open being of individual newborn life.

Ancient of Days is composed of a series of canons and fugues for video which express the passage of time.  Diverse rhythms of natural and subjective time are interwoven into a complex whole in a process similar to music composition.  Time becomes fluid to describe a world where destruction, run in reverse, becomes creation.  The inexorable winding down of time cycles leads to a muted scene of a still life in which remaining natural change is confined within a picture frame hanging on the wall.

A kind of temporal magnifying glass exploring the  phenomenon of repetitive cyclical viewing in the context of death and material dissolution.  A repeating cycle of images recorded at the Tsukiji fish market in Tokyo becomes continually extended in time, greatly changing the form, feeling and ultimately, the meaning of the original shots as they move further into the domain of the subjective and the pictorial.

A visual journey of the camera eye through the landscape of Japan, from the rural areas of the far north, location of the “land of the dead” at Osorezan mountain, to the luminous nocturnal underworld of the streets of modern Tokyo. The work is structured on the cycle of one day, the dividing line of light and darkness, the ancient and the new, nature and city, object and subject, rational thought and unconscious insight.

Toward the end of the tape, after a purgation through light and color during a deluge from a violent rainstorm on a car windshield, fish appear as rippling gold and orange hues under the surface of the water. The disembodied consciousness of the roving camera finally takes root on the night streets of Tokyo when an individual emerges from the urban landscape to strike a match flame. Sweeping the glare of a bright light directly into the lens, he finally disappears into the night shadows of a bamboo forest, trailing the silver-purple thread of a fading afterimage on the camera tube, recalling the first rays of sunrise that pierced the darkness at the beginning of the work.

The piece unfolds in extended time as a visual trance about light and its relation to water and to life, and also its opposite—darkness or the night and death.  Here, video treats light like water—it becomes a fluid on the video tube. Water supports the fish like light supports man. Land is the death of the fish. Darkness is the death of man. 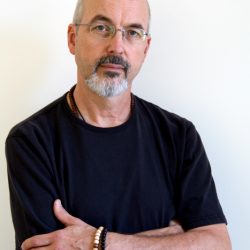